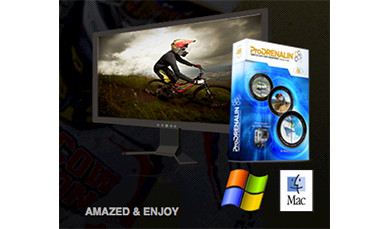 Action cam videos offer us the opportunity to capture our greatest adventure on film. Unfortunately, these videos are often blurred, showdistorted colours or are compromised by the fish-eye effect.

proDAD'sProDRENALIN received an outstanding score of 4.1 in the test by Multiroto.

"The power of ProDRENALIN is remarkable and almost a must-have for GoPro owners. ProDRENALIN, as well as Mercalli Easy, are a perfect match for gimbal stabilised recordings since gimbals can only stabilise tilting and rotating movements, ProDRENALIN and Mercalli are also able to dampen disruptive forward/backward, sideways, up and down movements, and are easy to design. The rolling shutter correction is a real asset, since the rotors often cast a shadow on the lens and the entire recording thus becomes useless."