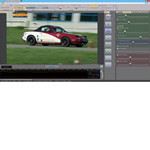 There are many ways to stabilise an action cam video. For "smooth" video enjoyment, the market has now developed a wealth of opportunities for stabilising action cam videos while recording directly in the camera or when post-editing on a PC.

We also receive letters and requests from customers on this topic daily. Here is a very interesting example of why you are better off leaving the internal camera stabilisation turned off and should instead focus on post-stabilisation with ProDRENALIN or Mercalli V4 SAL+.

A situation that is realistic and can occur often: A ProDRENALIN user had stabilised his videos with the Sony AS100V action cam duringhis last motorcycle tour afterwards on the PC. Nevertheless, the clip was not better after optimisation. We tried to detect the cause of this from the feedback of our customers, and have found it: Unfortunately, the effects of wind, bumpy roads and shocks to which action cams are exposed cannot be removed from the video. The image stabilisation integrated into the camera fails almost completely, depending on the application. The reason for this lies in the operation of the hardware stabilisation whose performance does not achieve anywhere near professional post-stabilisation on the computer. Essentially, the image material of the stabilisation integrated into the camera deteriorates so far that it even brings about disadvantages when subsequently optimising it using software.

Therefore, the stabilisation integrated into the camera should always be turned off during video recording to ensure optimum quality of the video material. Software like proDAD's ProDRENALIN or Mercalli V4 SAL+ can work wonders. The software helps beginners and experts to stabilise action videos with ease, to remove the fish-eye effect, or to enhance colours. Among other things, Mercalli V4 SAL+ offers an innovativeCMOS sensor corrector for professional video and film productions with the highest standards.

The starting material of the user described above with his AS100V was of such poor RAW quality that ProDRENALIN and Mercalli V4 SAL+ could not work with it. At first glance, the RAW video without the integrated camera stabilisation indeed appears much worse, but what Mercalli V4 SAL+ can then create from it meets even the highest expectations. Internal camera stabilisation, therefore, simply cannot keep up.

As it turned out during the investigation, the internal camera stabilisation had other disadvantages: 55 degrees of the wide angle werelost, the stabilisation of the camera can disrupt the Mercalli stabiliser and the rolling shutter correction did not work properly.

Therefore, it is better to directly turn off the camera's stabilisation in the future! The result of the video after editing with Mercalli will then convince you even more.

The ProDRENALIN user ultimately had to fasten his AS100V to his motorcycle once more and run around on his bike a second time. ProDRENALIN was able to stabilise, optimise and make a good impression for the second start!

For real professionals, Mercalli V4 SAL+ takes ProDRENALIN even one step further, since this software also provides a professional CMOS sensor and rolling shutter correction in addition to the "normal" stabilisation.